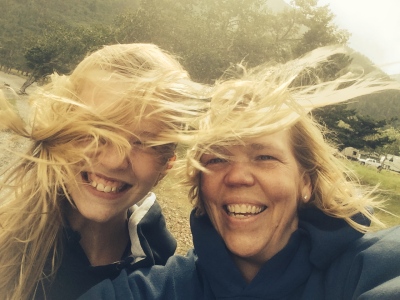 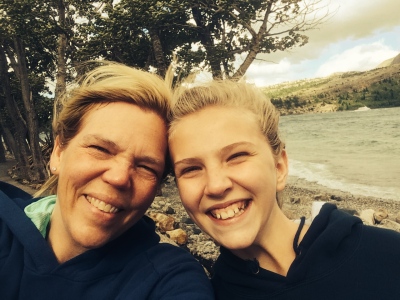 I took these photos this summer, trying to capture an especially heartfull moment with my daughter. We were in Wateron Lakes National Park, truly my favourite place on this earth and possibly one of the windiest places on the planet. It was so windy that my nine-pound pup was in a continual state of lift-off. We were walking head-first into gusts that were easily 100+ km an hour. Even the trees were groaning. We could hardly breathe. It was ridiculous to be outside in that weather but we couldn’t stop the laughter. It was THE awesome.

My heart was bursting with it all. I hadn’t had a lot of those kinds of moments with her in the past year or two. I wanted to hold onto its sweetness, put it in a bottle and cherish it. In the absence of a bottle, however, I used my phone. I took these selfies. Joy captured on a  4-inch screen. Hilarious, wild, perfectly happy, savour-it-forever joy.

In the weeks that followed, I would occasionally look at the photos and smile at the memory. From my phone screen, they were the loveliness to me. I loved our smiles, our squinty expressions bringing back the memory of the wind that burned our eyes and took our breath away. I was moved by our mother-daughter similarities. I loved everything about it.

A few weeks after that, as fall settled in and I felt myself longing for the easy days of summer, I decided to make one of the Waterton photos my Facebook profile pic. But on a 15-inch screen, the image evoked a different feeling. Instead of joy, I felt shock. And these thoughts:

I quickly swapped in a different photo as my profile pic, but before I could delete the McWrinkled version of me, people had ‘liked’ it. They were commenting on it, offering really lovely words. How could I delete this monstrosity now? Oh, balls.

How could this photo, which moments before had made me smile now fill me with such utter embarrassment? Instead of seeing our similarities and remembering our joy, I saw only evidence of my daughter’s obvious beauty and confirmation of middle-aged, wrinkled me. Now instead of wishing I could hold onto that moment forever, I was cursing myself for sharing it.

Sounds incredibly vain, I know. Forgive me. I was a little disappointed in myself, too.

What was all this self-inflicted shame about? I’ve made no secret of the fact that I’m 50. I’m good with it. Right? It’s just a number. Blah-dee-blah-blah. Based on my vain reaction, I obviously am not as good with it as I’d thought. Crap.

As I reflected on all of this, I was reminded of a program I’d listened to years before on CBC Radio. The interviewer had spoken with women at various decades in their lives, from their 20’s to their 70’s. All of them, without exception, admitted that when they looked back on photos of themselves taken in the previous decade, they saw their unmistakable beauty. Whereas when they’d looked at the same photo when it had been taken, they’d wanted to burn it or bury it at the bottom of a trunk somewhere.

The pearl of wisdom for me at that time was how important it is to appreciate your beauty as a woman today, right now at whatever age you are. This is clearly easier said than done. But the truth is, I do look back at photos of myself that had filled me with confidence-busting doubt at the time and think, ‘Wow. You were really pretty back then.’ Back then. Isn’t that sad?

So I have decided to turn this whole photo she-bangness into something I’m for rather than something I want to delete from the annals of my digital footprint forever. I also want to model something much healthier for my daughters, who are already looking at themselves in the mirror and telling themselves that they are either too much or not enough.

I want to make it a daily practice to say ‘Hello beautiful’ when I see myself rather than ‘Ugh. What’s happened to you, you wrinkly old broad?’

I think I’ll call it liking in the mirror. It’s going to take work, but I’m totally for it.

2 thoughts on “Take a like in the mirror: selfie-reflections on beauty”